Talking with Children about Cremations 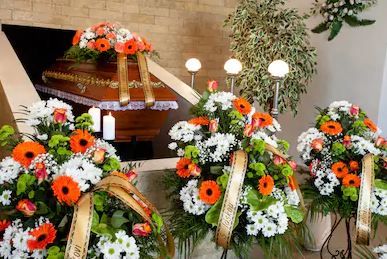 Flowers have been a mainstay of funerals at funeral homes in Dayton, OH for a long time, but you may not be aware of how the tradition of flowers at funerals began and why flowers are still a popular sympathy gift that is sent by some people to the funeral home or to the home of the family of the deceased.

You will notice that, although you may request charitable donations instead of flowers, you will still find that flowers are part of the funeral process. The interesting history of flowers as part of funerals can help show why flowers are still a popular tradition.

Read also: A Guide to an Order of Service

The use of flowers in funerals began for a very practical reason. Flowers were used to controlling odors as a body began to decompose. In the time before embalming became a common part of the funeral process and before refrigerated storage was available in funeral homes, bodies decomposed naturally very quickly.

Funeral home directors would drape a lot of strong-scented flowers around the casket – which is still traditional today – to mask the smell of decomposition, which could be very unpleasant. This was one of the reasons why funerals before embalming and refrigeration often happened within a day or two after a person died.

Once embalming and other preservation techniques improved and became generally accepted and available in American funeral homes (after the Civil War), the need for flowers to serve a practical purpose in the funeral process disappeared. However, flowers were also viewed as a tangible expression of sympathy, care, respect, and love for the deceased and the deceased’s family.

For example, in the Midwest, the funeral tradition included women who were chosen to be “Flower Ladies.” Their role was to carry the flowers from the funeral to the gravesite where they would carefully arrange them for the graveside service and burial. These ladies were chosen with the same careful consideration as the six pallbearers, and they were usually close friends of the family of the deceased.

Today, flowers are used to express sympathy, comfort, and emotional support for bereaved families. Not only do people send flowers to the funeral home, but they also send them – or plants –to the home of a family of the diseased.

While many people are asking for contributions to charities instead of flowers in their final wishes, there will always be people who believe flowers are more personal and that they better express their condolences than making a charitable contribution.

Flowers are also used to establish an atmosphere for the funeral service. Even now, if we attended a funeral service and no flowers were present at all, then it would make the service appear to be cold and impersonal.

Read also: Do Not Hospitalize Orders

We might even be asking ourselves if the person who died had any friends or anyone who cared about them. That’s how embedded the presence of flowers is in the funeral tradition. So, even if you ask for charitable contributions as the family of the deceased, you should know that it is expected that you, as the immediate family, are expected to purchase the funeral spray (in the deceased’s favorite color or with their favorite flowers) for the casket.

Different types of flowers have different meanings for funerals. Lilies, for example, which is the most common type of funeral flowers used, symbolize a return to innocence and purity. Carnations are also a common choice. Red carnations express respect, while white carnations symbolize remembrance. Roses are the third most common choice. White roses are associated with humility and youthfulness, while yellow roses denote strong relationship bonds.

If you’d like guidance about funeral flowers at funeral homes in Dayton, OH, our compassionate and experienced staff at Glickler Funeral Home & Cremation Service can help.